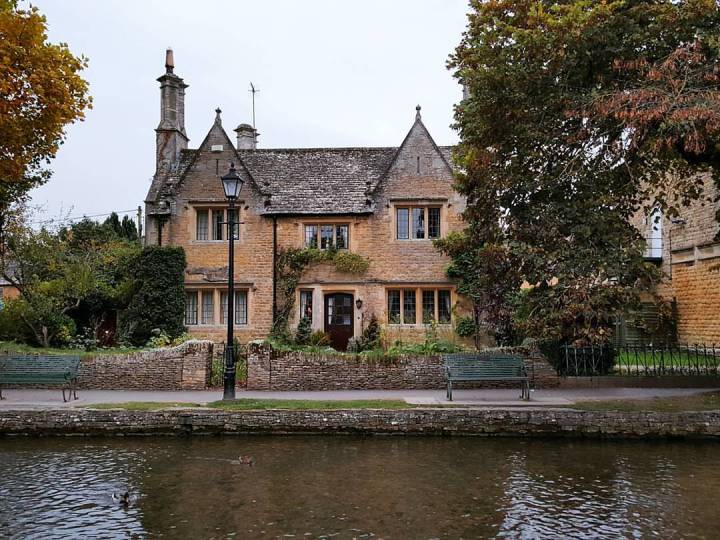 We took the early morning train from London Paddington Station because it was going to be a long ride to the Cotswolds. The Cotswolds is located in the English countryside and exactly what my dreams were made of. I was obsessed with the Great British Bake-off for years and was always stunned at the kindness and sweetness of the contestants on the show that I thought it couldn’t possible be real! And then I arrived to the Cotswolds and literally entered this alternate dimension where everyone is helpful, kind, and just refreshingly lovely. Literally the one word I would use to describe the Cotswolds is lovely.

Our Airbnb was located in a small town called Winchcombe in Cheltenham. It’s a small neighborhood in the Cotswolds and our maisonette was so nice and adorable! To get to the Airbnb, there were two options: take the bus or take the taxi (£30 and takes 20 minutes). We took the bus and learned that the town was doing construction work and rerouted all the bus stops and routes. This ended up proving challenging for us (more on that later) as we were relying on public transportation to get around. We eventually made it to our Airbnb and our host let us check in later but drop our things off early so that we can explore the town without dragging all our belongings around.

We walked around town a bit and found a nice tavern called The White Hart Inn for lunch. I, of course, ordered their fish and chips with mushy peas – the mushy peas sounds pretty weird, like baby food, but it really was tasty. It wasn’t that difficult for us to get a table for lunch but I would recommend booking a table in advance just in case since there aren’t too many restaurants with good food in the area and they tend to fill up quickly. You can book a table for The White Hart Inn here.

After lunch, we wanted to go to a few notable towns in the Cotswolds – this is literally what created JRR Tolkien’s Middle Earth. I had whittled down my list of towns to roughly 6. However, I completely miscalculated the buses due to the roadwork and we only made it to one town. We also had to take the taxi there since we couldn’t find a bus running to that town during that time. We went to Bourton-On-The-Water, otherwise known as the Venice of the Cotswolds. It’s a small town filled with cosy pubs and afternoon teas and has canals all over the place. It reminded me of the time I went to Giethoorn earlier that year – it’s a lovely town and great to stroll through.

Sadly, by the time we arrive to Bourton-On-The-Water, some places were closing up so we only stayed for about an hour or so walking around before we called back the taxi driver who dropped us off from Winchcombe. He ended up bringing his two-year-old in the backseat because he hadn’t expected us to finish so early. But we did mention to him that everything ended up closing early and he said that he thought it was odd that we wanted to spend two hours in a town that was closing up for the day. (Honestly, this was a running gag throughout our trip where instead of volunteering information, they just let us run with whatever we planned on doing despite it not being the best idea).

When we got back to Winchcombe, we decided to get dinner the Lion Inn. I got to cross off another traditional English dessert off my list: Eton mess. An Eton mess is a traditional dessert consisting of strawberries, broken meringue, and whipped cream. My friends also ordered the sticky toffee pudding with vanilla ice cream and the honey and almond panna cotta that jiggled like no one was watching.

Afterwards, we went back to our Airbnb to plan out our next day because it was clear that we were only going to have the time to visit one more town. We ended up settling on Stratford-Upon-Avon because that was a must-visit on my list as it was Shakespeare’s birthplace.

TOWNS IN THE COTSWOLDS THAT WE MISSED